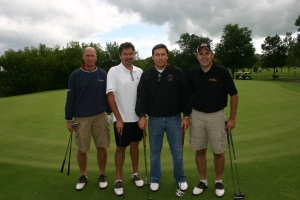 For the seventh straight year, people with a connection to the beef industry grabbed their golf clubs for a good-hearted competition. Approximately 180 golfers participated in the Beef Bucks’ Golf Challenge August 21 at the Brandon Golf Course.

“We had 45 teams, the most ever, golfing this year,” said Beef Bucks’ Board President JoAnne Hillman. “We didn’t know what to expect in this down economy, but the support has been fabulous.” She adds that there was a waiting list this year of people wanting to play.

That support also included 20 hole sponsors, a big increase from the first tournament back in 2002, when nine businesses or organizations stepped up to the plate. Other businesses donated door prizes and items for a live auction held in the evening following a 16-oz. ribeye steak dinner.